Our experts will reply you very soon.

* Mentioned prices may vary depending upon date of travel, hotel availability, surge pricing and seasonal rush.

Jaipur, also known as the pink city, is one of the most beautiful and culturally rich cities in India.
The city encompasses various magnificent edifices that enhance its beauty.
Its forts and monuments such as Hawa Mahal, City Palace, Jal Mahal, Rambagh Palace, Nahargarh Fort, Jaigarh Fort and Amber Fort are famous world over. 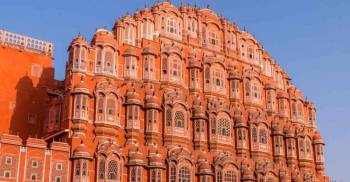 On arrival at Jaipur International Airport and transfer you to your hotel. Jaipur, the City of Victory was founded in 1727
by Maharaja Sawai Jai Singh II. It is a well planned city of magnificent palaces and building. Built from rose colored
terra cotta, it has given it the name Pink City. Nowadays, the Capital of Rajasthan with a population of over 3 million, it
is a city full of contrasts with bazaars teeming with turbaned elders and jean clad youngsters to camels, horses, and a
multitude of vehicles. Jaipur focal point is the magnificent Hawa Mahal, otherwise known as the Palace of the Winds
primarily an elaborate five story face with projecting windows and balconies, behind which the ladies of the court used
to sit and observe life going on in the streets below A Rest of the day is free to explore the colorful town independently.
Overnight stay at your Hotel.
Day 2: 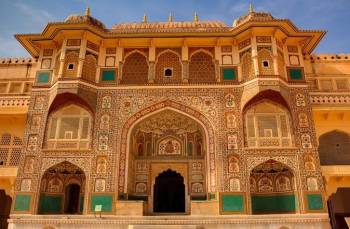 After a leisurely breakfast, commence your day with a photo stop at the Hawa Mahal (Palace of Winds) a five-storied
wonder with a spectacular pyramidal facade and overhanging windows
with latticed screens, domes, and spires. Continue on drive to the ancient capital of Amber to
see the fabulous Amber Fort, situated on a ridge just outside Jaipur city.Excursion takes you to Amber Fort. Riding on
elegantly caparisoned elephants, approach the palace in the traditional way. The high gateways allow us to enter on these broad backed
animals. Amber was once the ancient capital of Jaipur. Construction of the fortress palace
started in 1592 by Raja Man Singh, the Rajput Commander of Akbars army. It was later
extended and completed by the Jai Singh. The fort is a superb example of Rajput architecture,
stunningly situated on a hillside and overlooking a lake which reflects its terraces and ramparts.
Continue pass the rough the Jalmahal,The Water Palace, situated right across the hotel was a
favourite spot to which the maharaja would retreat along with his retinue, to enjoy the beauty of
the hills and the water- filled lake during the monsoon. Continue past to Ram Niwas Gardens and
architecturally impressive Albert Hall.MotiDoongri Palace a privately owned hilltop fort built
like a Scottish castle Visit Laxmi Narayan temple or Birla temple devoted to Lord Vishnu and
Goddess Lakshmi. Birla Mandir is considered as one of the finest temples in India. The 3 domes
of the temple signify the 3 religions that originated in this country.If you want Later visit the Chokhi Dhani Village for
Dinner (On Direct Payment) Chokhi Dhani
Village has been the mirror of Rajasthani culture since 1989. Started as part of ambience for a
restaurant, over the years it has evolved as a tasteful and authentic symbol of ethnic village life
of this most colorful state in the country. Today, the name of Chokhi Dhani is synonymous with
Rajasthani culture throughout the country. A village fair is created every evening as an ongoing
celebration of the rich and vibrant cultural heritage of Rajasthan. Live dance and music
performance all through the evening is one of the major attractions at Chokhi Dhani Village.Or Rest of the day is free to
explore the colorful town independently.Overnight stay at your Hotel.
Day 3: 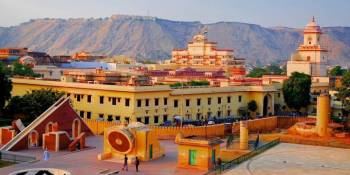 Morning enjoy your breakfast at the hotel. Later proceed for sightseeing tour of Jaipur explore the colourful bazaars of
the old city. Explore Jaipur visiting Jantar Mantar, an observatory
equipped with instruments of astonishing size and precision, including a 90 foot high sun dial.
See the Hawa Mahal or Palace of Winds, a major Rajput landmark built in 1799. This five story
building in the old city is a pink sandstone masterpiece with semi octagonal and delicately
honeycombed windows. The monument was originally conceived to enable ladies of the royal
household to watch the city everyday life and royal processions in absolute privacy. The City
Palace is the royal residence of the erstwhile King of Jaipur. It houses a museum with a superb
collection of Rajasthani costumes, armory of Mughal and Rajput weaponry, and swords of
different shapes and sizes with ornamental handles some of them inlaid with enamel,
embellished with jewels and encased in magnificent
After Lunch Later proceed for sightseeing tour of Jaipur Forts.
Jaigarh Fort Situated on hilltop, 500 ft above its foot there are two approach ways to Jaigarh, it
is fifteen km. From Jaipur and 1 and 1/2km from Amber palace. A tarred road joins one of its
approach gate known as Doongar Gate with Delhi Jaipur Highway at a distance of 10 km and 3
km from Amber. The approach distance of 5 km can be covered by a vehicle. The other
approach Gate known as Awani Gate is at a distance of 1 km from Amber Palace and there is
pucca steep road which can be covered on foot or by a four wheel drive.
Nahargarh Fort The Nahargarh or Tiger Fort is situated in the north west of Jaipur City, about
600 feet high.Like all Hill Forts the site has a steep slope which increased its defensive and
Strategic importance. It was constructed in 1734 by Sawai Jai Singh II.This fort was originally
called Sudarshan Garh after Lord Krishna. Maharaja Madho Singh addedMadhavendra Bhawan
which has nine palaces for his nine queens. The palaces are interconnected By two tunnels (Broader for queens and narrows for Kings) with rows of doors. The palaces At the entrances
are Chandra Prakash to the right and Surya Prakash to the left so called because The first
moon and sunbeam fall upon the respectively.
Or Rest of the day is free to explore the colorful town independently.
Overnight stay at your Hotel.
Day 4: 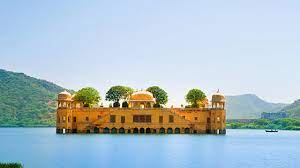 After breakfast, the day is free until transferred to Airport for your onward journey to the next destination